Are Christians in Pakistan Persecuted? 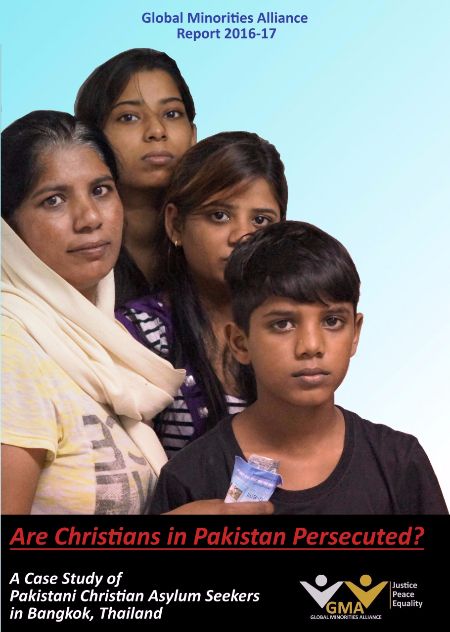 In recent years the Global Minorities Alliance (GMA) has observed an increase of attacks against minorities in Pakistan which has led to Christians heavy-heartedly fleeing their country, if they get a chance to do so, many of them going to Thailand.
GMA’s delegates, Shahid Khan and Rebecca Gebauer visited the urban refugee community of Bangkok, Thailand in July 2016. They met close to 100 individuals
and conducted 30 full interviews of Pakistani Christian families who fled religious persecution from Pakistan.

Their stories not only highlighted issues in Pakistan but also their plight following their escape to Thailand. Additionally, the delegates visited agencies and service providers in Bangkok to hear their side of the struggle.

In chapter 1 Rebecca Gebauer focuses the situation of Pakistani Christians who have escaped persecution
in their home country and fled to Thailand. Rather than finding refuge they have swapped one extreme
for another as Thailand has not signed the 1951 UN Refugee Convention and consequently offers no
frame work for seeking asylum in Thailand but rather criminalises any ‘illegal’ immigrant. Based on
interviews, she describes the plight of the refugees who get no support at all while not being allowed to
work; and the struggle of the UNHCR to cope with a refugee crisis which hardly gets any international
attention.

In chapter 2 Shahid Khan describes the situation of Christians in Pakistan and disputes the notion
stipulated by the UK Home Office that Christians in Pakistan are ‘only’ discriminated against rather than
being actively persecuted. He makes a strong case that Christians suffer deadly discrimination which is
deeply engrained in society and that the failure of Pakistan’s subsequent governments and their benign
complicity against minorities amounts to persecution even if the state tries to claim that it is not
immediately discriminating against them. Mr Khan supports his claim by assessing recent incidents as
well as statements made during the interviews in Thailand.

In chapter 3 Miss Gebauer draws attention to the detention practices in Thailand which violate various
international treaties. Citing scenarios described by GMA’s interviewees she brings the horrors of
detention to life. She then moves on to highlight the damaging effects of detention for children in
particular.

In chapter 4 Mr Khan draws special attention to gender based violence against Christian women. Backed
up by recent data, he presents a grim picture of the security of Christian women who are often subject to
sexual harassment and even to forced conversions and marriages. His observations are again illustrated
by passages from the interviews in Thailand.

Each chapter concludes with a set of recommendations to the Pakistan government, to the Thailand
government and to the international community. These recommendations all point to the unavoidable
conclusion that the plight of Pakistani Christians must no longer be ignored; and that immediate
measures need to be taken by the respective stakeholders.